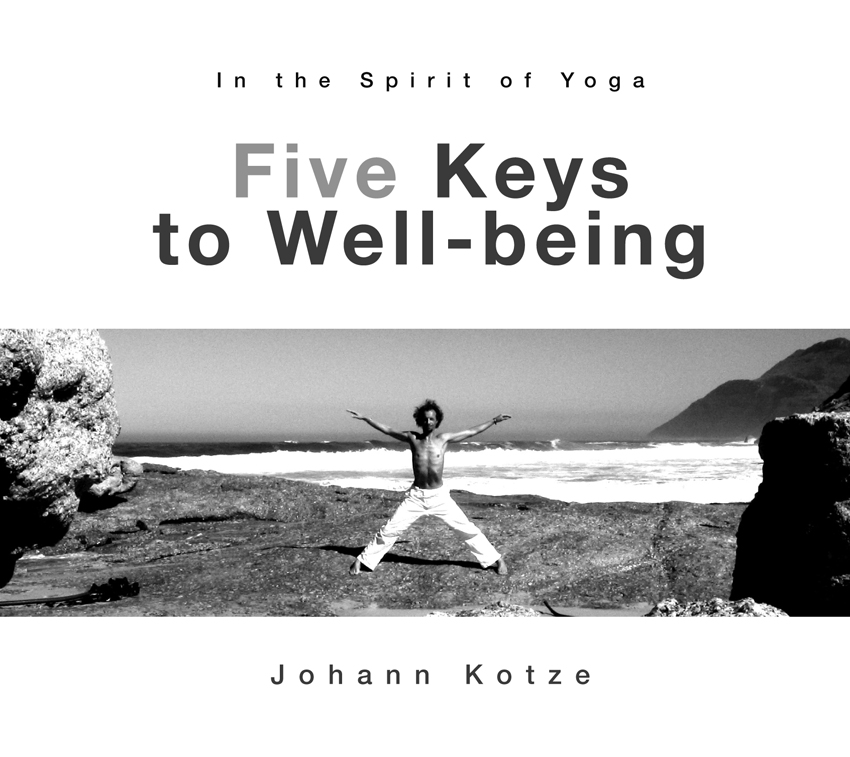 The Five Keys to Well-being. The Essentials of Effective Yoga.

The basic principles of doable, practical and effective yoga.

An understanding of the principles underlying the practice of yoga is equally vital for beginner, intermediate and advanced yoga practitioners, and for teachers. Anyone broader afield – from bodywork therapists and sports performance facilitators, athletes, and people with desk jobs – will benefit from the sound understanding of good posture, effective breathing and effortless mobility in the Five Keys.

Yoga is a comprehensive and balanced body-mind-spirit practice, so vast in scope that it is arguably the most advanced and effective system of well-being on the planet. The Five Keys to Well-being incorporates mindfulness-based meditation and yoga techniques that energise and focus the body and mind, while simultaneously assisting with stress release. The Five Keys include simple exercises to increase mobility, flexibility and strength, and facilitate the development of an integrated body-mind-spirit lifestyle.

Greater and more sustainable productivity and fulfillment at work and play flow naturally from regular practice of the Five Keys.

The Five Keys to Well-being is available as a 168-page book in a convenient CD-size format, that includes a 70-minute audio-instruction CD. A compact eBook version is also available.

All the techniques are easy to learn and simple to incorporate into any lifestyle. The Five Keys will help you improve the way you look, feel and think.

The Five Keys are suitable for anyone interested in well-being. Fit or unfit, young or old, healthy or not so healthy, everyone can benefit from these basic yoga practices. Universal and inclusive, these body-mind-spirit practices have no religious or dogmatic bias.

Find the introduction “Health, beauty, power and grace” to the book here. And I wrote about why I developed the Five Keys and the book, at the bottom of this page.

Please note that the CD/audio section does not include the exercises for mobility – these are only in the book.
Download the free Yoga Home Practice Routine pdf for exercises based on the Mobility Key.

Use player to STREAM/LISTEN/SHARE and << or >> buttons to skip tracks
BUY best quality mp3 at 320 k.p.s. and lossless WAVE, FLAC, AIF
Album download includes pdf with notes, instructions and directions for useDo-able and Effective Yoga

Narrated, written, composed, performed, recorded and produced by Johann
Cover photographs and design by Johann
Mastered by Tim Lengfeld at TL Mastering, Stellenbosch
Book and CD was released March 2006
Image at top of page is of the book origianl cover, image below is the 2nd edition CD sleeve. 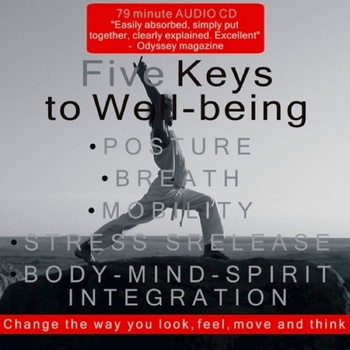 Why I wrote this book

One of the motivations I prepared the content for the Five Keys to Well-being with was to address the “image problem” yoga has as “difficult-to-do” and as an ” esoteric practice”. I continuously encounter and notice such perceptions of yoga amongst the general public.

A lot of people are so sure that yoga is difficult, un-doable, not accessible to most people, that they never bother to try it. Typical enquiries expressed by potential clients writing emails, or voiced to me in person, is a fear or concern that they wouldn’t be able to physically do yoga. That they are too old, too stiff, have too many injuries, can’t sit still and think of nothing, and so on. This is largely to do with the media, and the yoga freternity itself, that publishes streams of impossibly gymnastic yoga postures done by athletic individuals.

At dinner parties when I am introduced as a yoga teacher, or when I bump into a person in the village grocery shop or super market, and in emails, talk about yoga usually begins with “I am interested in yoga but would I manage it as I cannot stand on my head, bend much, touch my toes etc. etc”. Or many persons fear their age, poor condition, chronic injuries or disabilities will prevent them from doing any yoga at all.

Considering the beauty of yoga poses, presented by beautiful people or a select few supermodels and super whatever people as idealised, stylised exceptions rather than as “ordinary” people one can only have compassion for individuals who feel they have too many limitations to do yoga. A lot of people also still believe that yoga is dangerous, esoteric, weird, and counter to orthodox religion. Yoga is different to the norm, which is precisely it’s strength. All its positions, breathing techniques, mindfulness, everything, runs contrary to commonly held Western beliefs, as much of this norm simply does not consider simple, holistic health as a starting point. There is also the fact that much of yoga, and holistic health, is based on “unseen” principles of chakras, nadir’s (meridians) and such aspects that are not acknowledged by mainstream medicine and science. Fortunately, for large portions of the people of the world, the times have changed, and are a-changing. Studies are proving that yoga “works” and its benefits are promoted by many high profile athletes, celebrities, and businessmen.

As a yoga teacher I aim to present yoga in a clean, clear, simple and do-able way. Despite that readers of the Five Keys that are new to yoga may find its principles radically different, which is simply because the norm of the world as we know it is often so far removed from holistic bodymind well-being. Experienced yogi’s and yoga teachers will notice and absence of the hidden world of yoga, the chakras and nadis, this area falls beyond the scope of what yoga can be, and mean to, so many more people, when it is promoted as more do-able, and less weird.

Unfortunately for yoga, and for the millions of normal people that could have been doing yoga already, there is still that image of it as a gymnastically difficult thing to do. This is the rubbish image and “weird” situation I originally, and still am, addressing. I have been doing and teaching yoga since 1990, and one of my main visions for my vocation has always been to help shift the misgivings and misunderstandings about the weirdness of yoga. The fact that yoga is “different” and that its vantage point is so “opposite” to what has been the norm for so long, is really only ignorance that requires education and information.As long as I have done yoga and teaching it, going on a quarter of century, I have shuddered at the thought that this powerful system with all its wonderful benefits has not reached the masses, despite its growing popularity.

You may want to read my blog BodyMind, on my Johann Kotze Music & Yoga Studio page.